When you read about the electronic manufacturing services industry, virtually all you hear about are companies located in Asia, India and, occasionally, Africa. The “offshoring” boom of the 90s and 00s is still continuing in full-force... but there's more to the story than that.

There's a rapidly growing “stealth” success in the electronic manufacturing services industry as well: US-manufactured electronics. From the 50s through the 80s, America was known as the home to all the greatest electronics firms in the world, and even though much of the

manufacturing itself has moved overseas, the “Made In America” label still has a lot of cachet. Further, there are still plenty of cutting-edge manufacturing firms still located here at home.

So, what's changed? And why is electronics manufacturing suddenly making the move back to America? It lies in the Reshoring movement, which is rapidly gaining steam.

Obviously, offshoring in the electronic manufacturing services industry would not have become so widespread if there weren't good reasons to try it. The idea itself did make a certain amount of sense at the time: After all, manufacturing was so less expensive overseas that the cost savings could still offset any other problems that came up, like additional shipping and oversight costs.

However, the offshoring movement has become a victim of its own success. The cost of living in China has gone up so drastically in the tech centers that manufacturing there is only marginally less expensive than in the West.

Further, those costs that were being offset by the lowered manufacturing services prices have turned out to be more costly than many initially assumed. Cheap foreign manufacturing and assembly has become closely associated with low-quality devices that may not even be made from genuine components. Counterfeit parts are becoming rife in foreign-produced goods. 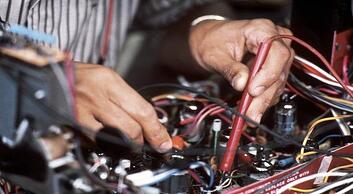 These quality issues mean significant post-sale expenditures on support and replacement, as well as being damaging to a company's reputation.

The distance factor weighs heavily as well. Having your manufacturing center so far from your R&D group makes change come slowly. Long supply pipelines often make impossible to alter orders – even if the market changes. Imagine having a hit product, and being literally unable to ramp up production to meet the demand!

Due to these issues, among others, increasing numbers of companies are rediscovering how easy it is to get quality electronics work done in the United States.

One might expect, in the face of this, that it would be mostly smaller, more nimble firms who
are bringing their work back to America, and they were the trailblazers. However, a surprising number of major firms have become to come back as well.

Reshoring as a solution to today's manufacturing needs simply makes sense. While the initial production costs are somewhat higher than in China (roughly 25% at the moment), you get a better product from a more flexible manufacturer, as well as helping to create jobs for people to buy your products.

It's a win-win scenario for American businesses, and for the electronic manufacturing services industry as a whole.