The PCB's Magazine's July issue features an article by Zentech's VP of Sales and Marketing, John Vaughan with Brian Friel of Nation Analytics. The present and future challenges of mil/aero electronics are covered from A to Zentech. Read article below or view PDF here. 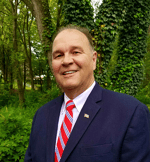 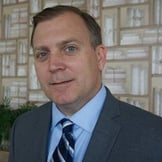 Patience may be the most necessary watchword for proponents of significant growth in the budget for the U.S. military. The historic increases in defense spending promised by President Trump on the campaign trail won’t come immediately, but it is likely that Congress will find ways to provide solid increases to the Pentagon’s budget, particularly in 2019 and beyond.

Whenever I want to dig deep into the complexities of the Defense budget, my first call is always to Brian Friel of Nation Analytics. Prior to launching Nation Analytics, Brian was a senior contract analyst at Bloomberg Government, where he spearheaded IDIQ research and created the BGOV200 annual ranking of federal contractors. Brian lives and breathes defense budget analysis and is an invaluable resource. As reflected in the following summary, Brian and I had the opportunity to get together recently and discuss the Defense budget status and the related funding mechanisms at length. 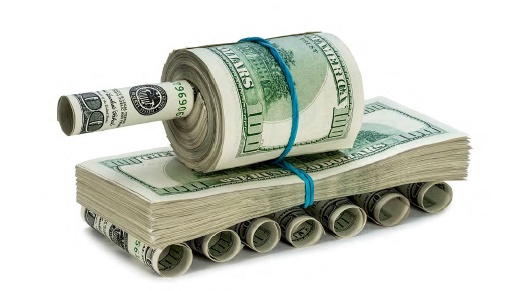 The administration has proposed a 7% year-over-year increase to the topline defense budget—that includes base, overseas contingency operations (OCO) and supplemental funding— for fiscal 2018, for a total of $639.1 billion. That falls far short of many defense hawks’ views of needed increases, but it nonetheless represents a turnaround from the tight budgets that Congress has enacted for Defense since 2013.

Tight spending caps under the 2011 Budget Control Act have governed defense spending since 2013, when sequestration allowed for only $577.6 billion in topline budget authority for the Pentagon. That total was a dramatic drop from the prior five years. From 2008 to 2012, the Defense budget averaged $671.1 billion and never dropped below $645 billion. 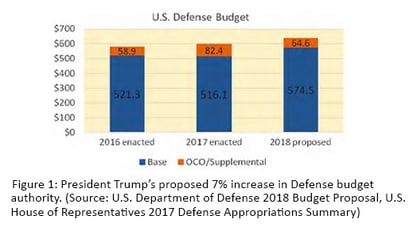 Senate Armed Services Committee Chairman John McCain, R-Ariz., has argued for a $700 billion defense budget for fiscal 2018, or about $60 billion more than President Trump’s request. That kind of truly dramatic, immediate increase in defense spending is unlikely given the political, budgetary and legal realities governing the appropriations process.

The base spending caps created by the 2011 Budget Control Act will continue through 2021 unless Congress acts to end or ease them. Budget hawks are unlikely to allow a complete end to the caps. Congress has eased the caps three times, appeasing budget hawks by cutting spending elsewhere in the vast federal budget to make way for defense increases.

Congress has also gotten around the defense cap by adding funds to the Pentagon’s budget by using supplemental OCO funding.

OCO funding is money set aside in the federal budget for emergency expenses connected to overseas operations such as: crisis response, infrastructure and coalition support for operations in Iraq/Afghanistan, humanitarian assistance in the Middle East and North Africa, and embassy security, among other needs abroad.

A mix of supplemental and OCO funding increases and modest increases to the base spending caps are the most likely way that Congress will make good on President Trump’s campaign promise. Growth at the rate proposed in the fiscal 2018 budget through 2021 would lead to spending at about the $780 billion level that year that Senator McCain is seeking, just at a slower immediate rate of growth.

It’s important to remember that the Trump administration has been in office for less than six months. Defense Secretary Jim Mattis has initiated a review called the National Defense Strategy, a new strategic planning process that replaces the traditional Quadrennial Defense Review. Mattis and his team must work through that review before proposing any major new initiatives or programs.

The 2018 budget directs the largest funding increase to operations and maintenance accounts to shore up the readiness of the force as the National Defense Strategy looks at how best to make investments in procurement accounts starting in 2019.

With ongoing terrorism threats, coupled with rising threats from Russia and China, both on traditional military fronts as well as new cybersecurity and space fronts, the external justification for defense spending increases is clear. Through the National Defense Strategy, the Pentagon will describe the internal justifications for specific investments in new weapons and existing platforms. The political and budgetary realities facing Congress will temper the growth aspirations of defense hawks, but industry should be prepared to ramp up activity on behalf of the Defense Department now that the era of tough austerity is turning the corner.

Given the lack of new programs—and despite the slower-than-hoped-for near term budget increases—there are substantial business opportunities for the military primes (and the sub-tiers such as printed circuit board fabricators and electronics contract manufacturers that support them) for upsides. The 2018 plusup in the military budget will allow the services to shore up existing systems and foreign military sales (FMS) will continue to be robust.

Summarizing, it’s time to patiently stay the course and let the budget processes unfold. Given all the actors on the world stage, it appears highly doubtful peace will be breaking out any time soon. Defense will soon be calling on industry to support our warfighters at accelerated levels and we need to be prepared to do our part in support of the many potential missions that are unfolding.

About Zentech: Zentech Manufacturing, Inc. is a privately held, engineering-driven contract manufacturer specializing in the design and manufacture of highly-complex electronic and RF circuit cards and assemblies. The company is headquartered in its purpose-built facility located in Baltimore, MD and maintains several key certifications, including ISO 9001:2008, ITAR (US State Dept.), AS9100 (aerospace), and ISO 13485 (medical). In addition, Zentech is a certified IPC Trusted Source supplier for Class 3 mission-critical electronics, and the company is IPC J-STD-001 Space Addendum QML certified.