Below is an excerpt from the interview, or read the full interview here.

Warner: I often say no one becomes a PCB Designer on purpose; people tend to “fall” into this line of work. How did you come to be a designer? 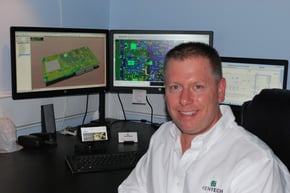 Brown: I aspired to be an architect when I was in high school. I was in a tech program, offered by my high school, and I excelled in drafting. There was a work study co-op opportunity I participated in when I was a senior...

That is where I met my first mentor, Mary Kerbe, who became my boss at a small telecom company called Commtex. She gave me the opportunity to learn simple circuit designs using a tool called P-CAD. I was a sponge – I was having fun learning a specialized skill, getting paid while at the same time earning class credits. I was 17 years old and just finishing high school when I had designed (replicated actually, lol.) my first circuit board.

Mary and I are still in touch and have worked together throughout my career--eventually, the student became the teacher, so to speak. After Commtex closed their doors, I followed Mary (as her protégé’) to several companies over the years: Entek, GE, Lockheed-Martin, and CTA Space Systems.

I grew tremendously over the years. I helped develop products for avionics space flight supporting customers such as NASA and Naval Research Labs. It’s an amazing sense of accomplishment knowing that you have had a part in developing something that will have a positive impact.

After this time I moved to Rochester, New York and did some contract work for Kodak designing boards for satellites. Who knew Kodak was involved with satellites? That is when I met my second mentor, Manny Marcano from EMA Design Automation. Through my relationship with Manny, I gained exposure to other EDA tools, such as ViewLogic (now DX-Designer), OrCAD / Allegro and my resource network started to grow...

I [eventually] went to work for Ciena Corp (specializing in DWDM - expanding bandwidth in the Datacom market developing optical networking systems) from 1997-2012. I started as a Sr. Designer, then became a Group Lead.

Next thing you know, I was responsible for leading various design teams on a global scale with 5 teams in three different countries and various time zones. We were developing state of the art equipment virtually around the clock. It was truly an amazing accomplishment not only in product development but in teamwork and collaboration like no other.

All of my fellow designers were truly skilled in their craft; whom I have a deep respect for. I remained an active designer, even though I was a manager--which I think was an important choice. I used many tools such as PADS, Allegro, Valor, CAM350, AutoCAD, ADIVA and Gerbtool.

In 2012 Ciena made some organizational changes where I as well as many of my colleagues were, unfortunately, let go. It was a business decision that many companies face, nothing personal. Buy hey – when one door closes, another opens. In hindsight, my tenure, experience, relationships and work ethic would pay off.

From late 2012 to early 2013 I started IDS (Interconnect Design Solutions) in Atlanta - it was a scary sink-or-swim chapter in my life! I pulled upon all my resources and relationships I had built over the years. The engineers that had disbursed from Ciena ended up at many different companies. However, we stayed connected and in communication, especially through LinkedIn.

Through these relationships, along with the help of Mary and Manny, I quickly had work from Orbital, EMA, Trilogic, and many others all because of a good reputation and strong relationships built over many years. I attended countless trade shows, fostered relationships via LinkedIn and made sure I didn’t stay invested in a single EDA tool.

Around 2014, I began getting job requests using Altium Designer and added that tool to my product offering in addition to an already established customer base using PADS & OrCAD / Allegro.

Within six months of being in business, I won a substantial contract through an independent rep with key customers in the mid-Atlantic region which enabled both his company and mine to experience major growth and to expand. I began doing a lot of work for Zentech Manufacturing between 2013 and 2016. Over time, I built a team of nine designers that worked with IDS.

Zentech (based in Maryland) was in need of design support. I spent the majority of my life in Maryland and was familiar with many of their customers, and had many existing relationships in the area. It was a natural fit! I began attending customer meetings with Zentech which cultivated trust and helped everyone to thrive and succeed. By 2016 IDS was experiencing 300-400% growth and Zentech made an offer to acquire IDS, which I accepted....