How One Business Brought Back Manufacturing Jobs 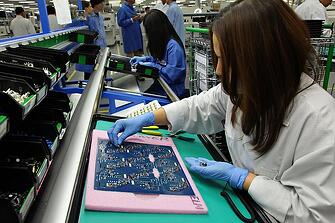 Zentech was recently featured in an article on marketplace.org regarding bringing more manufacturing jobs to the US. See the full article below.

If you want to find out how to bring manufacturing jobs back from Asia, one route might be to start with someone who’s done it. Matt Turpin is CEO of Zentech, an electronics manufacturer in Baltimore, Maryland. His company manufactures goods or components for other companies.

“We’ve brought back probably four projects in the past two years,” he said. There are “probably 30 people associated with those projects.”

How’d he do it? First, “the level of automation has increased dramatically," Turpin said. "What used to take two to three hours to build now can be built in under 10 minutes.

So if products don’t require much labor, then cheap Chinese labor isn’t that important.

Those two factors mean the number of manufacturing jobs leaving the United States now equals the number of jobs coming back, roughly, and it’s been holding constant for the past year or so.

In fact, despite political rhetoric, U.S. manufacturing is not in crisis.

Manufacturing may be employing fewer people because of automation, but it’s still churning out products and plenty of them.

“U.S. manufacturing production has held its own, it’s been a stable share of the U.S. economy over time” when measured in GDP, said Hanson.

Given all that, if you ask academics and business people what to increase U.S. manufacturing employment, there are a couple of things that come up frequently. One is regulation.

“Business creation in the U.S. has been on a long run declining trend,” said Nick Bloom, professor of economics at Stanford. “So the rates of new business creation in 2012 are about half what they were 30 years ago. A lot of that decline is being put down to increasing spread of regulation — occupational licensing, health care regulation, health and safety regulation. All of it is very well intentioned, but that massive red tape is stifling new businesses.”

“I’m already seeing it," he said. "There’s so many people in the workforce retiring and we’re starting to see a shortage of the people that need to come in and take those jobs. If we don’t have a skilled workforce, we’re not gonna be able to meet the needs of industry and they're gonna go overseas.”

Translation: The future’s here. Train for it.