How Do EMS Businesses Make the Right Capital Equipment Decisions? 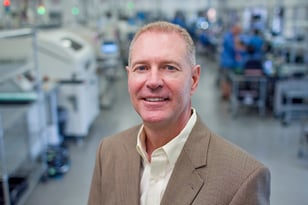 Being in the EMS business for about 35 years now, Turpin has already seen a lot of changes. According to him, in the old days—around 15 years or so back—an EMS firm could buy a set of equipment, and use the same set of equipment 10 years later. “Because technology just did not change that fast,” he says. “Back in the old days, you had a lot more mom-and-pop shops. A lot of Tier 4s and Tier 3s, because it wasn’t as capital intensive back then. It was great for an EMS business, selling from the equipment standpoint. I wouldn’t necessarily say ‘the good old days,’ but there’d be times where you bought the equipment, you could run the equipment, and things didn’t change that much. And then we entered a period where there was a rate of change, and we were like this until relatively recently, where you knew that there was new technology out there, but you could wait for a program, a customer, or an opportunity to come along before you buy. It’s like, ‘Okay, well, yeah I know that there are longer ovens out there. But if I get a 30-core layer board and it’s a big enough program, I’ll bite off and I’ll buy a new oven.”

Over the past five years, Turpin says you just don’t need to wait for a program because there was enough research to figure out what you needed. “You had to become fast with the technology to even know how you’d end up quoting, because you can’t just buy the equipment and start using it the next day. You have to develop a process around it. You’ve got to learn how to do it. You’ve got to hire people. In the EMS world, we are driven more towards having a technology roadmap, where we do need to plot out emerging technologies. Not just on the process side, but on the component side. Component suppliers are coming out with some crazy stuff that influences the equipment you need to process it. It is just creeping more into the EMS side.” As an example, Turpin said you cannot just get an oven only when you get a 34-layer board program. “You can’t just have one oven, you need to have three ovens that can do heavy layer boards and highly integrated BGA technology on those boards. You need more than one rework machine to be able to rework BGAs that are on that. You have to get out in front of that,” Turpin says.

One of the technologies that Zentech started looking at a year ago was cleaning technology. “We spent six months just looking at all the different versions. It used to be you’d see a couple of LGAs, a QFN, on a board. We’ve got some with hundreds of LGAs on a board now, and it forces you to a completely different cleaning paradigm where you can sort of clean it with the old stuff, but not really. So, you really need to look at new technologies all the time. It’s the same thing with 3D AXI. You can’t use a manual X-ray system when you have a Class 3 board with 400 bottom-terminating components. There’s no way any human being is going to accurately look at all those without glazing over. You need automated technology to do the heavy inspection on that type of work. You still have a human to do a sample to make sure you have compliant joints, but there’s no way you can screen all those bottom-terminated joints manually,” says Turpin.

How is automation, or the drive towards it, affecting the decision process in acquiring new equipment?
“In the EMS world and certainly in the military/aero and the medical side, your raw material expense is going to be around 60–70% of your revenue,” says Turpin. “The number one expense, in our world, is raw materials. From an automation standpoint, you certainly want to be automated in terms of how you buy, plan and process your raw materials.” While direct labor is always important, Turpin says it’s even more important to have a robust process that can make sure you have virtually no scrap. “You’ve got these $25–$40,000-dollarapiece PCBAs running through your facility at relatively low profit, low contribution margin. You really can’t afford to have any scrap. Your shift is focused less on labor to more on quality, reliability, and taking scrap down to zero. And, pretty much, rework down to zero, too, because you can’t afford to hold onto these components for very long. You’re more looking for velocity than you are efficiency on the labor side. Having said that, you’re always concerned about efficiency, but it’s not like it was in the old days because labor, as each year goes by, is increasingly a smaller percentage of your spend. At least, in my world.”

Advice for Designers
“Engage with a PCB fabricator. And, at a minimum, understand their pain and their process, and, in general, what they can and can’t do. Because the problem nowadays with PCB design is that the barriers to entry for somebody to call themselves a PCB designer are so low. There are so many people out there as contractors. More and more, even large companies are moving toward a contractor model. There are some bad designers out there that don’t know anything about PCB fabrication, they don’t know anything about what the EMS company has to do, and they come out with some really, really bad layouts that are almost unproducible,” he notes. “And the problem is, with a lot of the ways the contracting worlds work, by the time it comes to Kathy and myself, the design has been bought and paid for, and you’ve got a customer that really doesn’t even know what it is they’re dealing with. Then we’ve got to be the bad guy to tell them that, ‘No, this really isn’t going to work, and you’ve got to do this, this, and this.’ And it slows things down. Or worse off, they just don’t have the time and they just try to build it as is. Or they go to some other bare board supplier that isn’t going to ask the right questions, and just produce something that isn’t manufacturable.”

Communication
Turpin prefers to get involved from the beginning. “Last year we acquired a design service bureau, so we could have the scale and the toolsets to be able to do the layout on pretty much any platform. And that has worked, so the extent that we can get involved in the beginning, do the layout up front, and take care of all those issues and make the bare board fabricator’s life easier, make our life easier, and generally make it up. We’re reliable, cost-effective, with quicker time to market,” says Turpin. “In some cases, the OEM will have their own engineers. And, generally, when they’re doing their own layout—which is probably half the time if we’re not doing the layout—our customer has a dedicated designer who knows what they’re doing, and they will almost always look for input before they release the final package.” “In other words, to do one final look through a DFM and DFA to bring out any things that may have been missed or, particularly with the new package types, we always get calls from designers in our customer base when they are using a new package, in terms of talking about what footprint to put in a design. Because most of them are smart enough not to use the footprint that the manufacturer gives. They’ll use that as a basis, but they’ll always tweak it based on something. But it’s not enough. I wish it was 100% of the time we or somebody else could get involved. I would say 25–30% of the time we just get what we get, and we try to make it work.”

Conclusion
Don’t buy a piece of capital equipment unless you know what problem you’re trying to solve, whether it’s a technology problem, whether it’s a process problem. Maybe it is an efficiency problem. Know what you’re trying to solve, and then, whether it’s your evaluation requirements with the capex supplier, share those goals with them and how you’re going to evaluate it,” says Turpin. “Certainly, for a project plan, make sure that you’re checking for that, and in your turn-up of the process, that the problems you’re trying to solve are the processes you’re developing, and documenting, and rolling out during the roll out of the new piece of capex. But, that said, from a high level, start with a problem in mind. Don’t just start with, ‘Hey, I need to buy a piece of equipment X, Y, Z.’ Start with, ‘I’ve got a problem, A, B, C. How am I going to solve it?’” Finally, Turpin noted that, inasmuch as they want to be tightly integrated with their customers, he hopes that component manufacturers were as integrated with the automation suppliers. “To make sure that the things they’re doing are integrated with the way of properly placing components, cleaning components, inspecting components, things like that.”

About Zentech: Zentech Manufacturing, Inc. is a privately held, engineering-driven contract manufacturer specializing in the design and manufacture of highly-complex electronic and RF circuit cards and assemblies.The company has facilities in Baltimore, MD (headquarters) and Fredericksburg, Va. and maintains several key certifications, including ISO 9001:2008, ITAR (US State Dept.), AS9100 (aerospace), and ISO 13485 (medical). In addition, Zentech is a certified IPC Trusted Source supplier for Class 3 mission-critical electronics, and the company is IPC J-STD-001 Space Addendum QML certified.