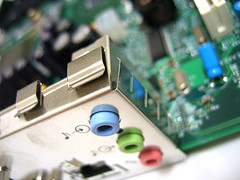 The military and aerospace markets require high-reliability electronics, components and assemblies that can perform in harsh operating conditions involving extreme temperatures, vibration, and moisture, to name a few. These issues continue to challenge electronics assembly providers. These are on top of current manufacturing issues such as the miniaturization of products, shrinking component sizes, higher density board assemblies, and the obsolescence of electronic components, as these systems, such as fighter jets and commercial planes, must function for up to 20 years.

In our recent survey on military and aerospace, a majority of the respondents point to obsolete parts and components—and also the dwindling number of sources for legacy parts—as among their biggest issues in military/aerospace electronics assembly. Another issue is the reliability data of commercial technology components and how they can be used in military and aerospace products.

Raw material and component lead times are also an issue, along with increasing requirements from customers such as inspection and documentation, and compliance to multiple regulatory standards, such as ITAR, DFARS, AS9100, and NADCAP.

One of the compliance issues highlighted in our survey, and also discussed during our interview with the team of mil/aero experts who helped us plan this issue, is cybersecurity. This group included Freedom CAD’s COO Scott Miller, Lenthor Engineering’s VP of Marketing Dave Moody and VP of Sales/Engineering John Rolle, and Zentech’s CEO and President Matt Turpin and VP John Vaughan. Our experts focused on cybersecurity, in particular, the NIST Special Publication 800-171, published by the National Institute of Standards and Technology, which describes the US government security controls for unclassified information in non-federal information systems and organizations.

To read the full version of this article, which appeared in the July 2017 issue of SMT Magazine, click here.