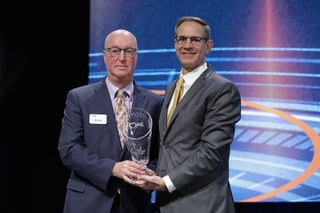 Goldman: I understand that; you care about the industry. Tell me what you think about getting this award.

Pudles: If I look at all of the activities that I’ve been involved in for both the EMS industry and IPC in general, I’m really honored. I’m proud of the body of work, including my volunteer work, over the last 34 years. I remember being the youngest person in the room, and now I’m getting to be one of the oldest, except for the other Hall of Famers (laughs). There’s quite a difference in age between lots of the other people who have won the award. Again, I’m honored to be recognized for helping to bring the industry forward and transforming the organization to help make the group what it is today.

Goldman: What do you see coming down the pike at IPC and elsewhere?

Pudles: There are a lot of programs that are in place today that are going to continue to strengthen the international presence of IPC. We’ve always been a very strong organization in North America. We now have a very strong presence in Asia, particularly our training and certification activities. We’ve always had a good membership group in Europe, and we’ve recently added capability in that area; hope-fully, we’re going to continue to provide for our customers and constituents in Europe as well. I see the continued emergence of IPC as a strong international organization.

IPC is also emphasizing getting participation from colleges and universities. We want to encourage people, who didn’t even know that we existed as an industry, to join local chapters and understand things about the industry that most don’t learn until five or 10 years after graduating from college. There’s a nice opportunity to bring students in and create the next generation of EMS and PCB employees.

Goldman: How much longer do you think you’re going to stay involved? I mean, you were already retired once, but now you’re out of retirement, so that’s all over.

Pudles: I am not going to be as quick to go back into retirement. As far as IPC is concerned, I’m on the board of directors, and I hope to be reelected for another four-year term. Because of term limits, it has to be my last term on the board, but I will continue to stay involved with the EMS Management Council and other activities as long as they’ll have me.

As long as I’m working in the industry, one of the things that I’ve always felt very strongly about is the more you put into IPC programs and the EMS industry, the more you get out of it—whether it’s people you meet, other companies you’re exposed to, or processes and procedures that you learn about that other people are doing that would work better than things you’re doing at your company. As long as I’m employed in the industry, I’ll remain involved with IPC in one aspect or another. I have no short-term plans on leaving the industry again, so I will be there for at least the next five to 10 years, hopefully. I couldn’t imagine being part of the industry and not being part of IPC in one situation or another.

Goldman: As you said, I’ve always felt that with your involvement, you learn so much. It’s hard to explain to somebody until they’ve been involved how much you learn from everybody else.

Pudles: That’s right. I’ve had the opportunity over my career to visit hundreds of other facilities around the U.S. and the world. That has helped me to see the way things are done very well, and not so well, and understand the types of things that I’d like to take the best in class and try to build the organization I’m involved in, whatever company I’m with at that point in time. It has provided a great education, on top of everything else.

Goldman: And as much as you’ve seen and learned over the years, there’s always something else out there.

Pudles: One of the tough things, as we keep going, is to involve companies that haven’t participated, especially in the IPC EMS Management Council. You find that the same people come back year after year, and there may be one or two new companies, but some don’t come back at all. Infusing new ideas comes from infusing new companies with their own experiences and backgrounds into the group to see the way other people do things differently. I always encourage people to come to the meeting and see if they pick up one or two things that you can take back to their own company. The more you put into this business, the more you get out of it.

Goldman: That is so true. I also have a philosophy that if a person is a volunteer, they will do so regardless of which company they work for. There’s a lot to be said for people that volunteer and contribute.

Pudles: And it’s not only the person volunteering. When someone volunteers, whether it’s a standards committee or one of the councils, generally, the company you work makes an economic investment. Zentech still pays me while I’m sitting in a meeting and traveling, in some cases. The bottom line is it’s not only the people that are volunteering, but it’s their companies as well.

Also, we are very fortunate to have Dr. John Mitchell as the leader of IPC, along with the complete staff. We have one of the best working management groups that I’ve ever seen in this organization today, and that’s really something that John has put together very thoughtfully through his tenure. It has made the growth and idea of expansion a lot easier to know that we have a competent group managing the day-to-day business.

Goldman: He has breathed some nice life into IPC.

Pudles: He’s a brilliant man, and he’s one of the hardest working people you’re ever going to meet. He’s very thoughtful. One of my major accomplishments was participating in the search for him and participating in bringing him on. I’m pleased to have been part of the transformation of the organization.

Goldman: We have all benefited from that quite a bit. Thank you for your time, and again, congratulations.

Steve Pudles has over 35 years of comprehensive EMS industry knowledge and executive-level experience. He is currently president and CEO of Zentech Manufactur-ing Inc., a milaero/medical/high-reliability EMS company based in Baltimore, Maryland. He has previously held senior-level positions at Spectral Response, API Technolo-gies, NuVisions/OnCore, IEC, and Tanon/EAI.

Steve attended his first IPC EMS Management Council meeting in 1987 and has spent the past 33 years serving the IPC in a variety of roles:

Steve has been heavily involved in shaping the IPC’s Certification, Validation, and QML Programs that exist today. He has also helped steer the positioning of IPC-610 and IPC-620 Workmanship Standards replacement of the historical military standards for work performed for U.S. Government Contractors.

Steve holds a bachelor’s of engineering and a mas-ter’s of science in management from Stevens Institute of Technology.